I mentioned I was getting ready to leave for Spain, and I eventually did get on a plane (a long-delayed redeye flight), but before crossing the Atlantic I planned for a few days in New England. I anticipated enjoying some good talks with the friends I’m staying with, but didn’t think I’d spend much time out and about.

Still, Jeff and Tammy had family coming to visit, so I joined this morning’s outing to a New Hampshire maple sugaring outfit, and have both pictures and trivia bits to share.

You may have noticed a substantial difference in the cost of real maple syrup and what’s sometimes called pancake syrup. Being reminded of the labor and time involved in syrup production amply explains that disparity. Making a gallon of syrup from maple sap with a very high sugar content (say, 10%, relatively unusual) requires twenty gallons of sap. Producing a gallon from sap with a lower sugar content (from later in the season, perhaps 2 or 3%) can take 40, 80 or as much as 130 gallons of sap.

Other interesting facts: The little device generally used to tap trees is called a spile (save that for whatever word game you like to play). 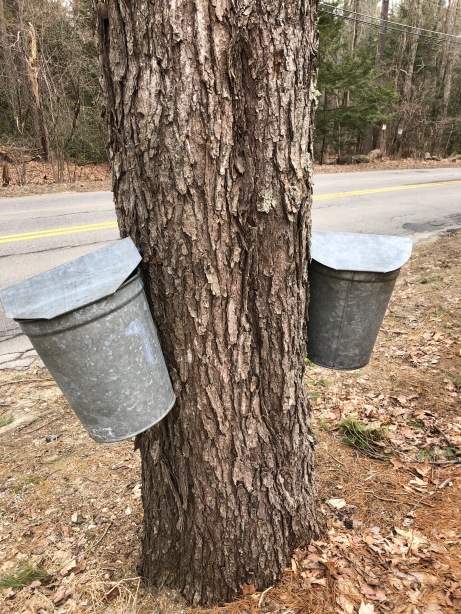 The galvanized hats keep leaves and bark bits out of the sap.

Modern maple people often use tubing to collect the sap from the trees, which then drains into 450 gallon tanks.

The light tubing attaches the spiles to the line that runs between trees and down to the tank. 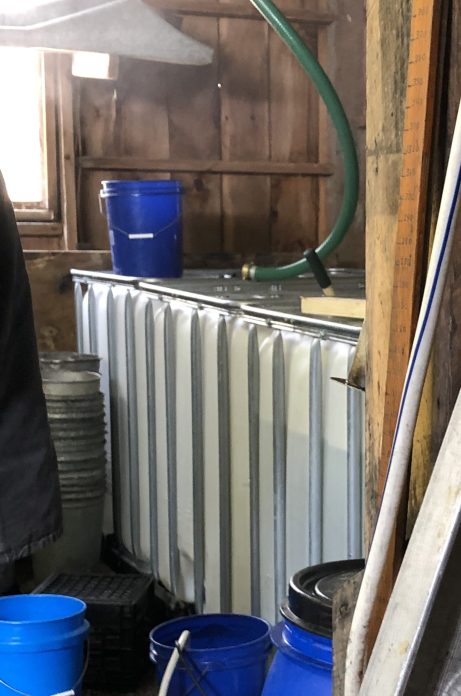 Several plastic tanks lined up in the the sugaring shed

The galvanized tubs that predated the plastic ones

Our guide, a man who has been maple sugaring for 25 years, told us how the neighborhood kids get involved, and how the woman in charge of the process teaches them what to do. She asks them to wrap their arms around a tree, not just as a gesture of affection, but as a way to gauge how old the tree is, and how much sap can be safely tapped. A 10-inch-diameter tree is a one-bucket tree, for example.

This is a three-bucket tree, about 130 years old.

The maple sugar guy holding up a hydrometer

I was a little distracted (trying to take pictures for you) during the explanation of the hydrometer’s use in the process, but I gather that it’s the tool that lets you know when the sap has boiled enough and its moisture content has gone down enough to be syrup. The desired end point is 67% sugar.

And where do you boil hundreds of gallons of sap? In a long low tank contraption. Looking through the doorway from the room with the storage tanks it was hard to see much because of all the steam. Eventually, though, we were able to  see this:

the downspout for bringing sap to the cooker

The sap-to-syrup transformation requires nine or ten hours of constant boiling, accomplished by the burning of a LOT of firewood.

Pallets end up as firewood, too.

These days sap is brought in on tractors, but in bygone days sleds (hanging from the rafters) provided transport. 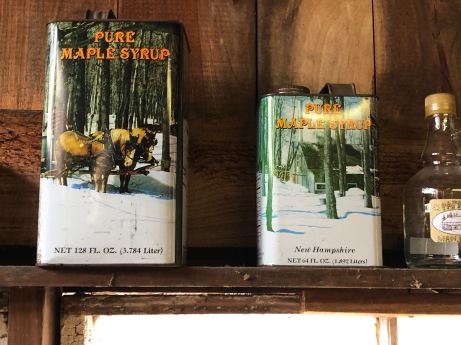 Before plastic jugs there were these tins.

I really wish I had asked what this thing was. Any guesses?

In the gift shop there was lots of syrup of all kinds (grades) and sizes, as well as maple-flavored everything: things you would expect, like jelly beans and fudge, as well as cotton candy. In addition, they had maple candles (not bad) and lotion (not something I decided to investigate). I saw a display of natural bug spray, but can’t report on whether it smelled like maple. That would not seem like a really good idea.

I could say I didn’t buy anything because I’m about to get on another plane with an eight-kilo luggage weight limit, but in fact I never buy stuff at gift shops. Tammy bought some maple donuts, though, so there’s that to look forward to.

I can’t share the donut, but I can share one last bit of trivia: Sinzibuckwud is an Algonquin word for maple syrup. It means “drawn from the wood.”

Now, anyone in the mood for pancakes?