I’m leaving tomorrow for this year’s sojourn in Spain, my sixth. The day before departure in past years has varied–sometimes I’ve been really prepared, sometimes less so. Though in many ways I’m just about ready, in terms of my subjective experience and the way that I keep being startled by random thoughts about details I haven’t yet pinned down, this feels like a less-so year.

In thinking about some of those last-minute details, and about this post, top on my to-do list, I was reminded of a scene of hurried departure in a favorite children’s book, and that’s what I’ll share with you today.

The meal before a journey was contemplated

Here’s a passage from C.S. Lewis’s The Lion, the Witch and the Wardrobe, right after it has become clear that the White Witch is on her way to capture the children and their new friends:

As soon as Mr Beaver said, “There’s no time to lose,” everyone began bundling themselves into coats, except Mrs Beaver, who started picking up sacks and laying them on the table and said: “Now, Mr Beaver, just reach down that ham. And here’s a packet of tea, and there’s sugar, and some matches. And if someone will get two or three loaves out of the crock over there in the corner.”

“What are you doing, Mrs Beaver?” exclaimed Susan.

“Packing a load for each of us, dearie,” said Mrs Beaver very coolly. “You didn’t think we’d set out on a journey with nothing to eat, did you?”

“But we haven’t time!” said Susan, buttoning the collar of her coat. “She may be here any minute.”

“That’s what I say,” chimed in Mr Beaver.

“Get along with you all,” said his wife. “Think it over, Mr Beaver. She can’t be here for quarter of an hour at least.”

“But don’t we want as big a start as we can possibly get,” said Peter, “if we’re to reach the Stone Table before her?”

“You’ve got to remember that, Mrs Beaver,” said Susan. “As soon as she has looked in here and finds we’re gone she’ll be off at top speed.”

“That she will,” said Mrs Beaver. “But we can’t get there before her whatever we do, for she’ll be on a sledge and we’ll be walking.”

“Now don’t you get fussing, there’s a dear,” said Mrs Beaver, “but just get half a dozen clean handkerchiefs out of the drawer. ‘Course we’ve got a hope. We can’t get there before her but we can keep under cover and go by ways she won’t expect and perhaps we’ll get through.”

“That’s true enough, Mrs Beaver,” said her husband. “But it’s time we were out of this.”

“And don’t you start fussing either, Mr Beaver,” said his wife. “There. That’s better. There’s five loads and the smallest for the smallest of us: that’s you, my dear,” she added, looking at Lucy.

“Well, I’m nearly ready now,” answered Mrs Beaver at last, allowing her husband to help her into her snow-boots. “I suppose the sewing machine’s took heavy to bring?”

I’m doing my best to lean minimalist in my packing this year–no loaves, tea packets, handkerchiefs at all, and certainly no sewing machine. Unlike past years, when I’ve had to pack for two seasons and several months, this year I can pack for spring only, and can keep in mind that if I find I’ve missed something vital, it’s likely I can replace it at a street market.

Now, I’d better bustle around a bit, for minimalist packing involves some planning that I haven’t yet done. 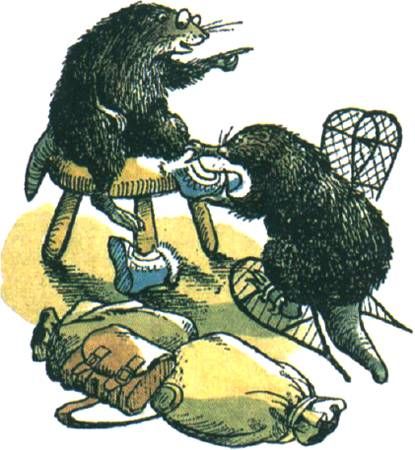 Mr. Beaver helping get boots on

3 thoughts on “Packing with Mrs. Beaver”