Tomorrow is the first anniversary of the mass shooting at a high school in Parkland, Florida, but I’ve already written about that, so I won’t go back over the details. It just reminds me of the culture our children are growing up in, and what it must be like for them to do drills to practice reacting to active-shooter or bomb-threat situations, in the way that in my childhood we learned “stop, drop and roll” in the event of a fire.

I’m sad that young children in schools in the US understand the term “lockdown,” when this shouldn’t have to be part of their vocabulary. And I was greatly affected by this post: 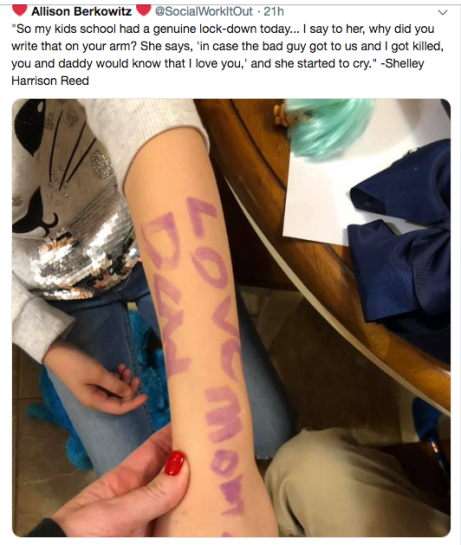 Think about being this mom, reading this message on the arm of her daughter. Think about being this girl (seven years old), taking shallow breaths, finding a marker, trying to keep her hand steady as she writes her parents a note while she crouches down in the classroom that should instead be a setting for story time.

Your feelings about guns or other weapons may be different than mine.* But I hope we share the feeling that keeping children safe ought to be a priority.† Here’s a link that will help you find contact information for the people who represent you in the United States Senate and House of Representatives, and for those you represent you in your state legislature as well.

On those websites there will be a place that you can convey your concern about issues that are important to you. I’ve been told that emails to legislators don’t get the attention that physical mail, phone calls or in-person visits do, but they’re not nothing, and they’re a place we can start.

Don’t hesitate to get in touch.

*The only hateful comments I’ve received on this blog have been from someone tearing into me on the topic of guns, so I know we don’t all agree.

†The lockdown referenced above was in response to a bomb threat, not someone roaming the halls with an AR-15 rifle, but both of those scenarios are far too common, and deserve our attention.