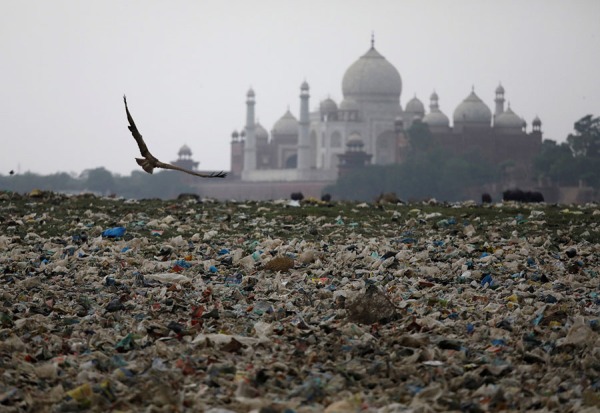 May 19, 2018: Garbage is seen on the polluted banks of the river Yamuna near the historic Taj Mahal in Agra, India. REUTERS/Saumya Khandelwal

It seems like everywhere I look these days I see articles about the growing environmental threat posed by plastics. Perhaps I’m more attuned, having done a bit of research on the subject. Or it could be that such articles are becoming increasingly frequent because the problem is becoming increasingly dire. Maybe it’s a combination of both.

In my recent post I invited us all to consider what we might do personally to limit single-use plastics. If you chose something to try, I hope it’s going well for you. I feel like I’ve upped my game a little, but it can be hard to see places to improve when the way we do things is just a collection of habits we don’t often examine.

In the grocery store a few weeks ago El Guapo questioned the package of Greek yogurt cups I was putting in the basket, wondering if the one kilo tub would involve less plastic. (Once home with my digital scale I gathered data on that–surprisingly, the little cups together weighed less than the big tub.)

Take a look at the photos in a recent Atlantic piece, which illustrate the urgency of the project ahead. I include a few of them below, in case anybody wonders, how bad can it be, really?

May 18, 2018: A Vietnamese woman gathers shells in a coastal forest littered with plastic waste stuck in branches after it was washed up by rising coastal tide in Thanh Hoa province, around 150 km south of Hanoi. NHAC NGUYEN/AFP/Getty Images

Eloquent evidence of what a stomach full of plastic does to a black footed albatross. Midway Atoll is a bird sanctuary, but you can’t tell the birds what to eat. Each year the US Fish and Wildlife service removes about 20 tons of plastic and debris that washes ashore from surrounding waters. Midway Atoll is surrounded by the Great Pacific Garbage Patch. (Dan Clark/USFWS via AP)

May 6, 2018: Egrets gather in a garbage dump at Kathirana, on the outskirts of Sri Lanka’s capital Colombo. LAKRUWAN WANNIARACHCHI/AFP/Getty Images

Solving the plastic trash problem will have to involve governments, corporations and communities as well as individuals. But it seems to me that we can at least keep from making the problem worse through our personal choices while we look for ways to contribute to the effort to make it much better on a large scale.

[Go to this Atlantic collection to learn more about the images.]

One thought on “Synthetic mess”