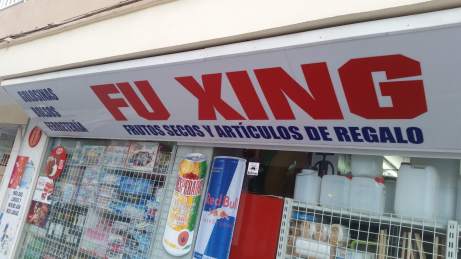 I’m working on two mysteries today, and they intersect in one corner store.

The first is the fact that the ubiquitous variety stores in Valencia seem invariably to be run by East Asians (though they may all officially be Spaniards by citizenship). When I say this, odds are good that there’s a cognitive bias at work, probably the availability bias, or availability heuristic,* depending on how fallutin’ your source is.

Here’s an example: if you ask yourself whether it’s more common for a word to begin with the letter C or have C as the third letter, you’ll probably assume the first is more common, but that may only be because it’s easy to think of words that begin with a certain letter, and much harder to sift through your vocabulary trying to spot words with a certain letter in the third spot. (If I’ve awakened a mighty itch to know where the letter C is more common, I’m sorry! If I come into possession of that fact, I’ll pass it on.) 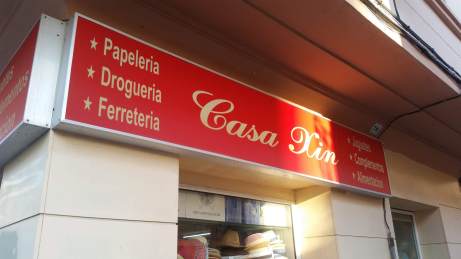 I’m not saying that no East Asian in the city works in any other field–I don’t have any data on that.† But in the “we’ve got some of nearly everything” store category, East Asians dominate to a marked degree.

I just thought of another way I could be going wrong here, and there’s probably a technical name for this bias, too, though I’m not sure I know it. What if I’m only counting in my total the kinds of stores that look like all the others of this particular type? Are all the variety stores run by East Asians, or do I only notice those that are run by East Asians? What if there are other variety stores that carry nearly everything, but they don’t look like Chinos from the outside, so I haven’t noticed them? I will keep my eyes peeled, and get back to you on that.

This one doesn’t really have an Asian name, so I thought I might have contrary evidence, but the gentleman inside was East Asian.

In the meantime, I’ll also note a parallel tendency in Valencia, and that is for fruit-and-vegetable sellers to be of Middle Eastern, Pakistani or Indian origin. I wonder what factors contribute to this labor pattern. It would surprise me very much if there’s some sort of official statute on the books proclaiming that such enterprises are exclusively reserved for people of these backgrounds. It may be that there’s something more informal going on, like, “hey, your cousin is moving to my city? I know a place he might be able to get a job.”

I know that in the Greater Boston area, the likelihood of the Dunkin’ Donuts shop you wander into being run by a Brazilian is extremely high. I’m assuming that happens because a Brazilian with a donut shop has friends looking for work, and he hires them. As one of those employees prospers and decides to branch out into a new location, she hires other friends, or friends of friends, and so it goes.

The second mystery will take less space to comment on. The Chino nearest us has signs on three sides giving mostly the same information, but one word is spelled differently in a couple of places. Sometimes it’s “Caramelos” (candy) and sometimes “Carameros.”

The reason for the spelling variation can no doubt be traced to the challenge that distinguishing L and R can be for many speakers of some Asian languages. I won’t go into that here, but my question is, what was the thinking for spelling it one way on one sign, and another way on another? Hedging their bets? Or maybe, “It’s a variety store, so let’s keep variety in our spelling!”

I note now that this sign is a different color, and might have been made at a different time. So maybe this is the first wave of replacing the signs?

*From Wikipedia: The availability heuristic is a mental shortcut that relies on immediate examples that come to a given person’s mind when evaluating a specific topic, concept, method or decision. The availability heuristic operates on the notion that if something can be recalled, it must be important, or at least more important than alternative solutions which are not as readily recalled.

†Well, perhaps one single data point: When we attended our first classical music concert in Valencia, I was gobsmacked to behold a symphonic ensemble of 75 members that included not a single East Asian musician. In my experience in New England, East Asians make up a much larger percentage of any classical music ensemble than you would expect, based on their numbers in the population at large.