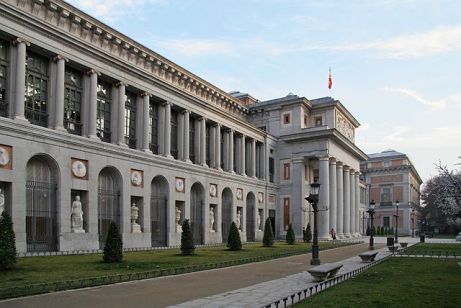 Our recent trip to Madrid featured an enlightening evening in the Prado museum, where we spent our time in front of masterpiece after masterpiece. Surprisingly, names of a number of artists were not quite as I remembered them.

Here’s a painting I recognized. If it’s one you also recognize, you might be thinking Albrecht Dürer. Yet the name plate beside the artwork told me it was painted by Alberto Durero. 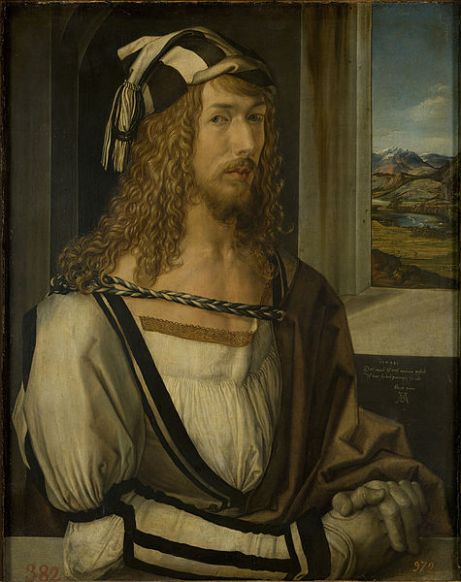 At the Prado’s website I can see the same claim, though when I go to the painting’s description in English, the name flickers and then transforms into Alberto Dürer, I guess splitting the difference. Curious.

I’ll note right up front that changing names is hardly new, and hardly something that sets the Prado (or the Spanish art world) apart. Christopher Columbus didn’t, in fact, land in the Americas. That was Cristóbal Colón. But exploring all the ways that names get changed seems like quite a daunting prospect. For today, I’m interested in the ways that my assumptions get challenged while contemplating art, and this is one of those ways.

This Italian painter’s name is changed in Castellano, but it’s changed in English, too. All three names sound fairly similar. 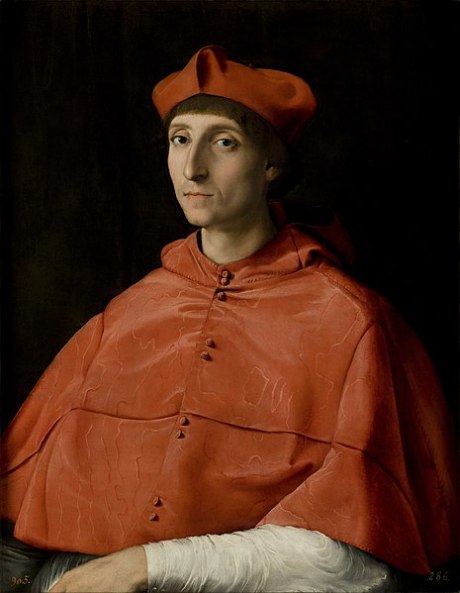 The Prado owns the painted panels by Hieronymus Bosch now referred to as “The Garden of Earthly Delights”: 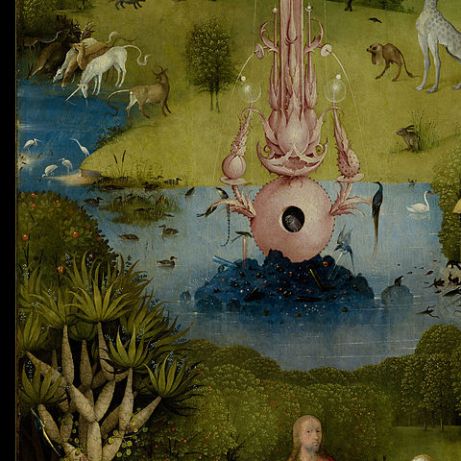 One of the tamer sections of the panels, none of which strike me as showing many delights. Painted between 1480 and 1505.

The name plate in this case indicates that the art is by El Bosco. The Prado website gives his first name as Jheronimus, adding an H that prompts the J sound English speakers are familiar with. Without the H following, the J will sound like the speaker is trying to clear phlegm from the throat. But the question hardly arises, since most mentions of the artist refer to him simply as El Bosco.

The painter I know as Titian is called Tiziano in the Prado, but it’s not the museum that made adjustments–Titian is the Anglicized version of the artist’s Italian name. So while I was surprised, it’s the English that set me up for that one. Tiziano is the name by which his own people know him. 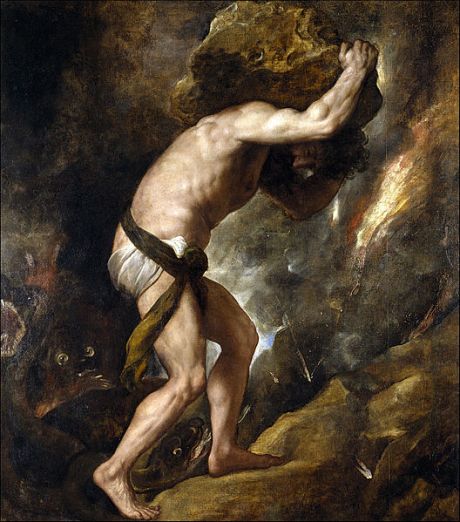 Titian’s Sisyphus (or Tiziano’s Sísifo) carrying the rock up the mountain, yet again. 1548-1549

Whoever’s doing the changing, the fact remains that some folks don’t get rechristened, and I wonder how that is decided. Perhaps the renaming in Castellano happens most when the original would be hard for Spaniards to say.  (The double L in Raffaello would become a Y sound, for instance), and maybe they’re not fond of the sh sound, as at the end of Bosch (or maybe they just shy away from sounding like Argentinians, who make the sh sound out of the double L).

My tentative theory gets support when I find no changes in names that are probably easy for Spaniards to pronounce (Polidoro da Caravaggio, Jacopo Robusti Tintoretto), but it suffers in the face of painters like Rogier Van der Weyden. His name, featuring a few syllables sure to give a Spaniard some trouble, is not changed at all. 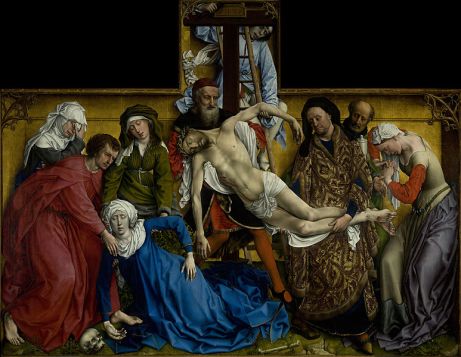 Like Van der Weyden, the English painter Thomas Gainsborough keeps his name, even though there’s an easy Castellano version of Thomas, and even though Gainsborough might be an odd Spanish mouthful. That superfluous “ugh” at the end seems like the sort of thing that name-changers would just lop right off. 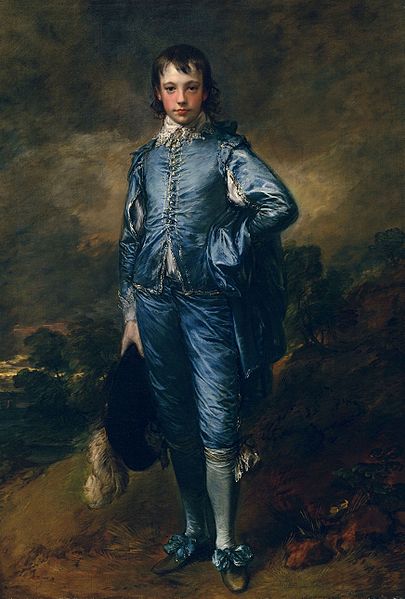 The Blue Boy (Portrait of Jonathan Buttal) by Thomas Gainsborough, circa 1770.*

And why does Nicolas Poussin, a French painter, retain his spelling? There are other options for his name, which in his mother tongue means a chicken killed young, for eating. In Castellano he might instead be called Pollito. Not very likely, I guess. 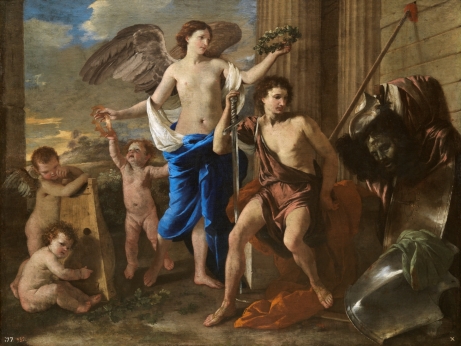 El triunfo de David, Nicolas Poussin, 1630. As my mom would say, they appear not to have had enough budget for costumes.

I’ve written to the Prado to see if there’s someone who can tell me more about how they decide which names will change, and which will stay the same. If someone gets back to me, I’ll pass on what I learn. I promise, hand on my heart. 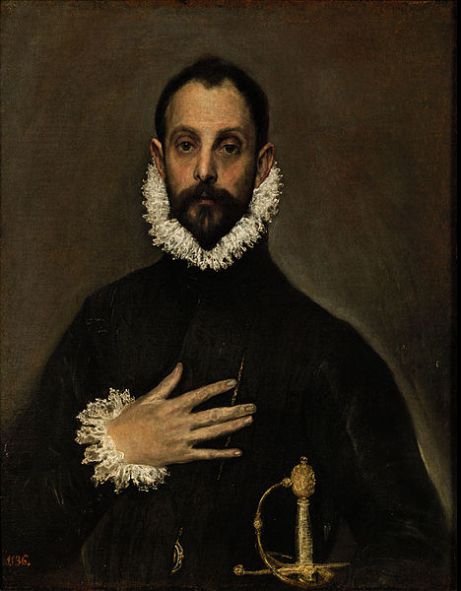 Listed in the Prado catalog as “The knight with the hand on his chest” by el Greco, about 1580

In the meantime, if you’ve been to museums in countries that speak a language different than yours, have you noticed any patterns about how artists’ names are handled?

*The Prado has a couple of Gainsboroughs, portraits of dignified white men in wigs. I include this Gainsborough out of nostalgia–a small reproduction of it hung in my parents’ bedroom during my childhood.

[Images: the Poussin is from the Prado’s website; all others from Wikipedia]

5 thoughts on “The names have been changed, and I’m confused.”