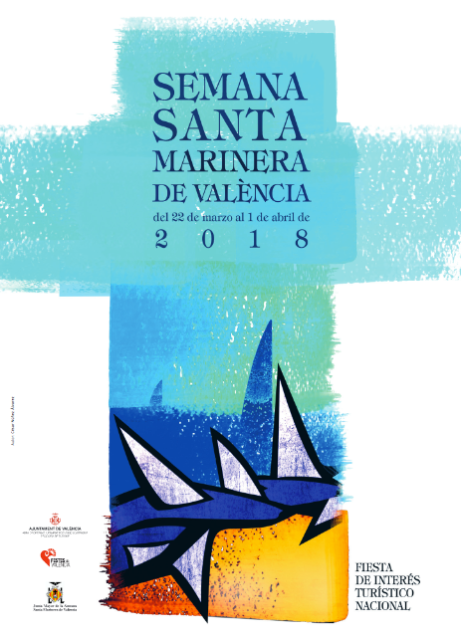 Perhaps you’ll remember me saying that we were planning on catching up on our sleep now that Fallas is over. Perhaps I hadn’t realized how close Holy Week would follow on the heels of Las Fallas this year. And perhaps I had no idea about all that Holy Week would mean in our new neighborhood.

Drums at midnight and church bells that ring on and on–we aren’t getting as much post-Fallas quiet as we anticipated. But we’re getting lots of opportunities to see another side of Valencian community in action.

Because of our experience with Las Fallas over the years, we’ve become accustomed to spotting the Casal Faller signs over the Fallas club doorways we pass, but are only now beginning to make sense of other signs. This one is beside a nondescript garage-door-like thing a few doors down on our street:

It turns out that this place, and dozens of others like it, open during the days before Palm Sunday. They house special displays related to the celebration of Easter. Here’s our nearest neighbor: 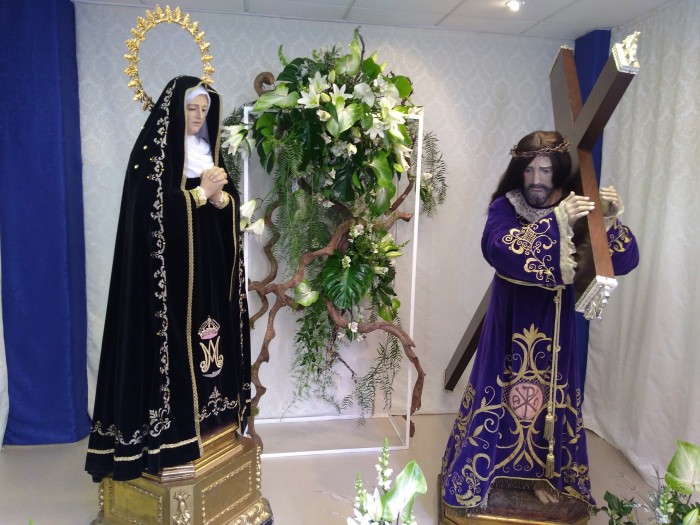 To the left of the door there was a map posted, showing all the locations of similar displays in the vicinity, along with the schedule of when we could expect to find this one open. 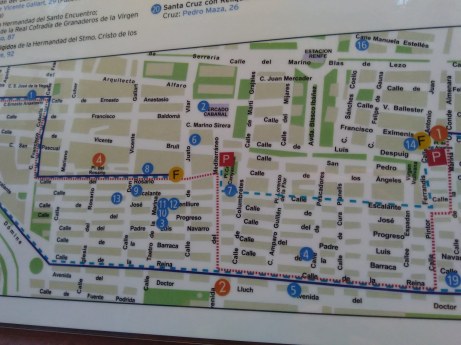 During the last few days, every time I heard bells or drums or a band striking up, I’d grab my house keys and my phone and head out the door, and then I’d just follow the sounds. Once I happened upon a small crowd forming to witness this: 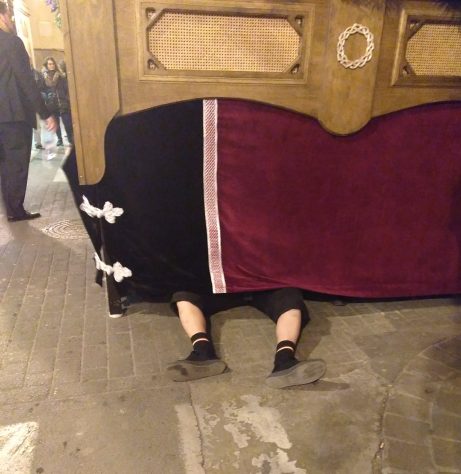 Not the Wicked Witch of the West, just a man making some sort of repair or adjustment, I assume. In a minute these sneakers joined a bunch of others, and the guys wearing them began to move what was clearly an extremely heavy structure: 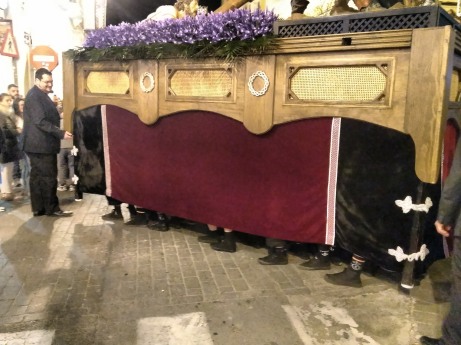 They did a sort of shuffle dance, but whether that was choreography, or simply the only way a dozen men could do what they needed to do, I can’t say. After a bit they were able to round a corner, and everyone clapped.

Here’s a view of what they were carrying around: 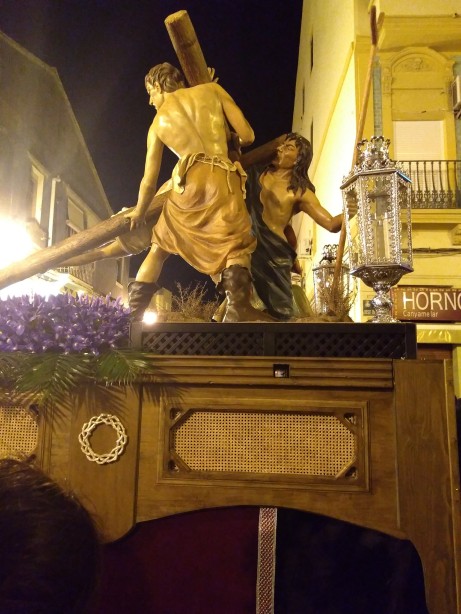 On another occasion I got a chance to see a different group with a different giant structure, this time not mounted on sneakered people, but on some number of wheels. Robed figures pushed and pulled to get it in position: 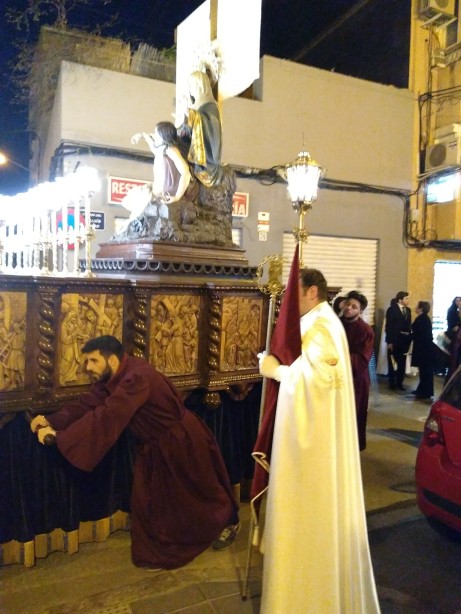 The statue atop the structure was soon installed in another one of the neighborhood enclosures: 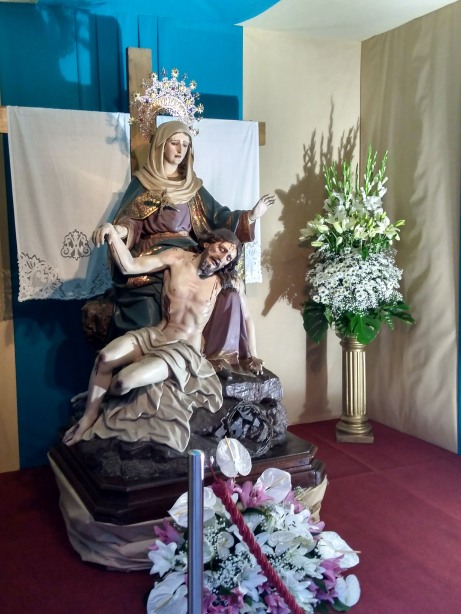 A couple of streets over I witnessed the installation of another statue, this time being brought in under a canopy. There was a large crowd, some incense, and some hooded figures that for Americans conjure the Ku Klux Klan. 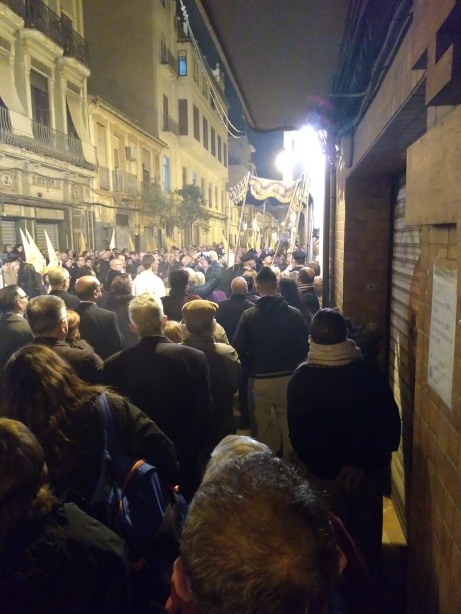 On an intellectual level I knew that the hoods, called capirotes, date back centuries,* long before the KKK, but that didn’t prevent me from freaking out a little bit, at least to begin with. The more people I saw wearing them (and in mundane situations), the more I was able to separate them from my mental associations. 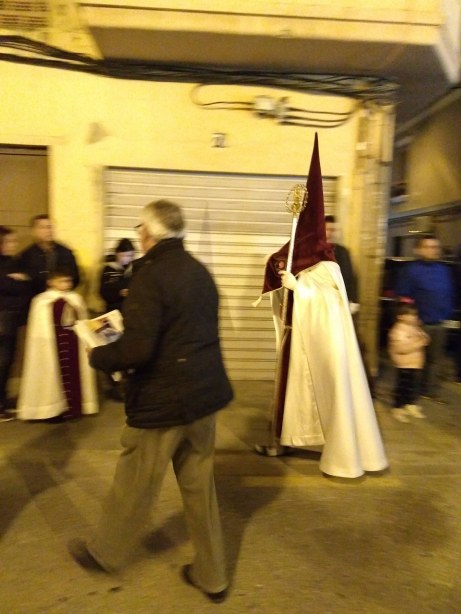 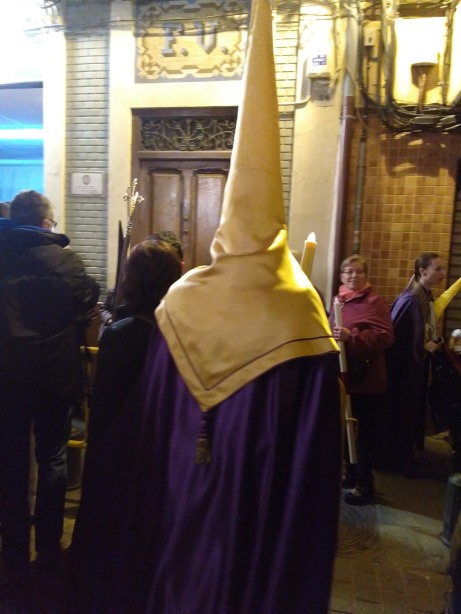 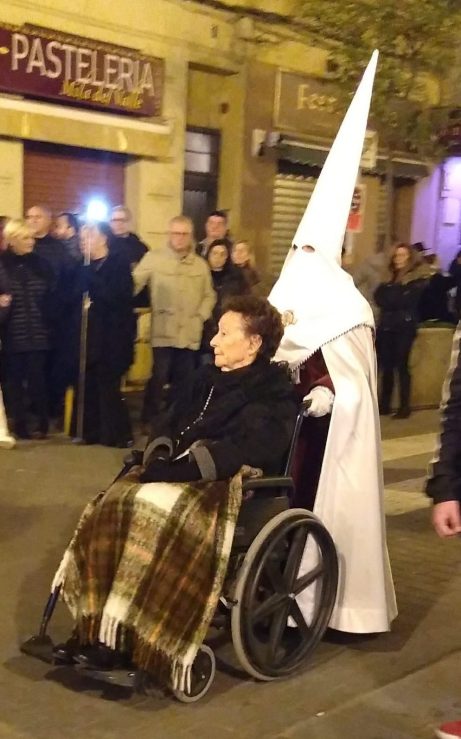 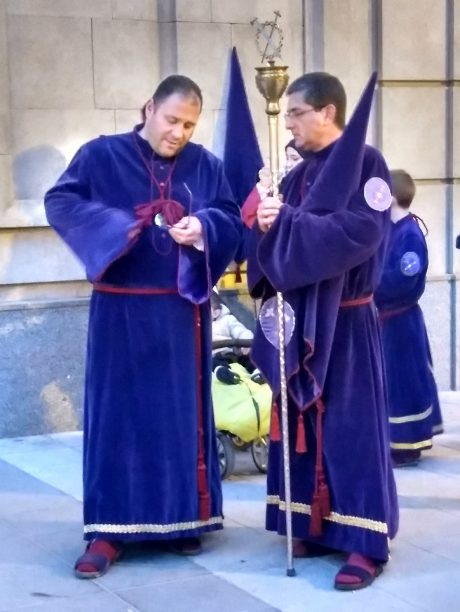 When they’re in solemn formation, they can be a little more intimidating. I didn’t manage to catch those kinds of shots in my own neighborhood, but I did find a photo to share of a procession in Salamanca: 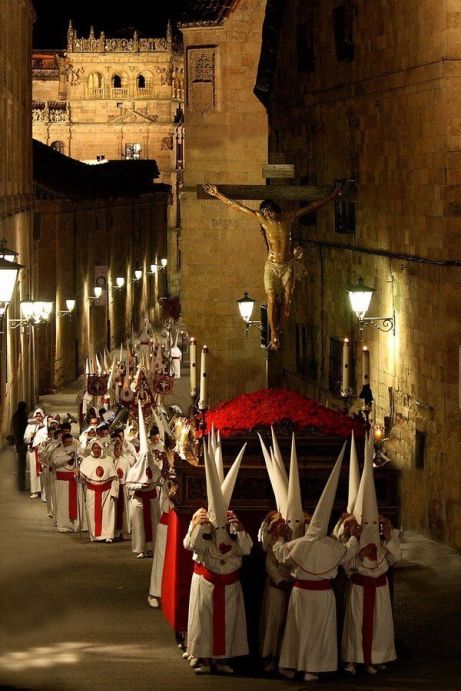 Just as Las Fallas fills Valencia with neighborhood clubs that come together around a deeply traditional activity, Semana Santa draws Valencians together in Hermandades, or brotherhoods, each of which is represented by different hoods and robes. We’ve seen lots of different examples, but I was very happy to find a guide: 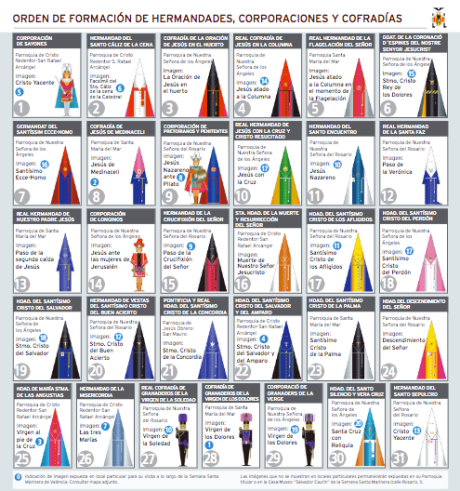 This link will let you explore the graphic in more detail.

Clearly, I’ve still got a lot to learn, if I want to be able to identify the ranks of hooded figures that pass by on parade.

The many aspects of celebrating Semana Santa in Valencia are very different from my own religious culture, but I appreciate seeing how others observe the holiday, and I feel a kinship with the people around me that are focusing on Jesus’s life, death and resurrection.

Your own celebrations for tomorrow may have absolutely nothing in common with the pageantry we’ve been seeing in Spain, but I hope the day is a meaningful one for you. Happy Easter!

*Wikipedia tells me that the hoods date back at least to the 15th century, and symbolize penance. There’s some connection with the Spanish Inquisition, which keeps company with the Klan when it comes to terrible. It’s interesting that originally the hoods were worn by the tormented and not the tormentors.