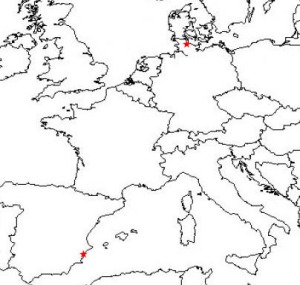 Without really meaning to, during the week before Easter this year we happened to be in the southern part of Spain as well as the northernmost part of Germany. We’ve gathered up several photos to share.

Our first stop was in Alicante. We had a few hours between the arrival of our train from Valencia and the departure of our flight to Hamburg.  It was the day before Palm Sunday, and there were stalls outside the Central Market selling palm fronds for the next day’s worship.

My plan was to take a few pictures from the side of one stall, as Spaniards tend to be a bit cagey about photos in commercial settings. The result was a quantity of yellow confusion.

Fortunately, El Guapo has a good zoom lens, so he could be further back and still get a picture with some details that begin to make sense.

You may still consider it a lot of yellow confusion, but you can see some woven stars and ladders or chains formed from the narrow leaves. I found them really interesting. If we hadn’t had a plane to catch, I think I would have followed some people leaving the stalls to ask about taking close-ups of their purchases. Maybe I’ll do better next year.

I think of Spain as a very Catholic country, and there appears to be data to back me up. Wikipedia tells me that about 68% of Spaniards identify as Roman Catholic, though only about 15% of those say they go to church every week. I would have thought that Germany’s numbers would look very different, but they still tell a story of fairly strong religious identification: 59% of Germans identify as Christians, and almost half of those are Catholics.

I can’t say that there are no cunningly woven palm fronds for sale in Germany for Palm Sunday, as we arrived at the airport after markets would have closed. What I can say is that most of the Easter decorations we’ve seen in Germany have been of a very different kind. There are lots of eggs hanging from trees (as well as a few eggs hanging in art galleries), and eggs tucked in various decorations. It’s likely that some of these are not intended to be Easter decorations as such, just harbingers of spring.

A few from the farmers’ market: 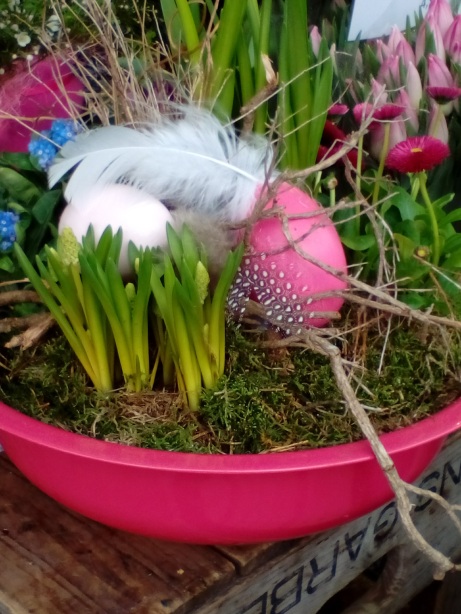 And a few from the cafe at the botanical garden:

And then there are the bunnies. In the shopping center we visited a few days ago we found small bunnies:

and a very large bunny:

He looks a bit ominous, no? Ninja, Liebling (both with bunny ears) and El Guapo snuggle up.

There are other ends of Europe with Easter traditions we can hope to explore in future.* For now, we’re hoping that our Osterbrot† turns out well. Have you got some Easter preparations going?

*I guess there’s a limited time in which to get some Cadbury eggs in England before it Brexits the EU.

One thought on “Easter preparations at two ends of Europe”