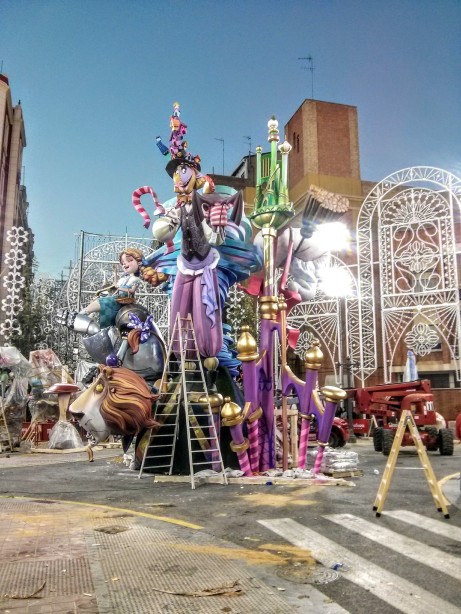 This is the top part of a Wizard of Oz Falla partially assembled.

We’ve been spending half of our time in Spain since the start of 2014, so we’re making some progress in understanding how things work here, but there’s always more to learn.

Shortly after arriving in January we were out on our bikes one evening and noticed a lot of fireworks being set up along the fountain in front of the Palau de la Música. We stopped to talk to some policía nearby and asked what was being celebrated.

They explained that this year’s Fallera (Princess of the Fallas festival) was being announced that evening. I said that I was under the impression that Fallas didn’t get started until the last Sunday in February (when explosions provide an early-morning wake-up call). The policewoman replied that Fallas never ends.

This ceremony, called “the exaltation of the Fallera Mayor,” is what we missed the night of our bike ride.

To the predictable, organized and thunderous explosions of the Mascletá each afternoon at 2 pm in the city’s main square has been added the unpredictable, disorderly and nearly heart-stopping minor explosions of ubiquitous small fireworks being lobbed by children of all ages, including some throwing from inside their strollers.  Many streets are closed to make way for the huge Fallas sculptures to be installed at intersections. Banners of the flag of the Communitat Valenciana criss-cross streets, and the air begins to smell of deep-frying, as street vendors set up to provide churros, buñuelos, and more. 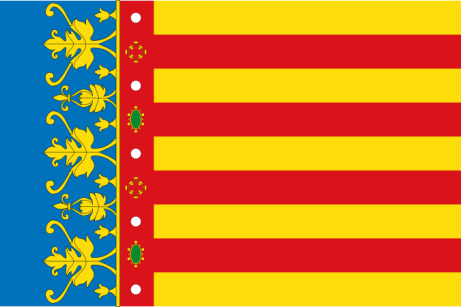 El Guapo has a bunch of classes to teach next week, and Ninja and I have some days of home school to get through, but we’ll also be out and about snapping photos to share. And I’ll do my best not to fall off my bike when shocked by nearby explosions.

Nine days from now everyone will be too exhausted from sleepless nights to begin cleaning up the debris, but all the big events will have come and gone, at least for now. I have no doubt that folks involved in many of the aspects of Fallas have already begun thinking about 2018. And so it goes. 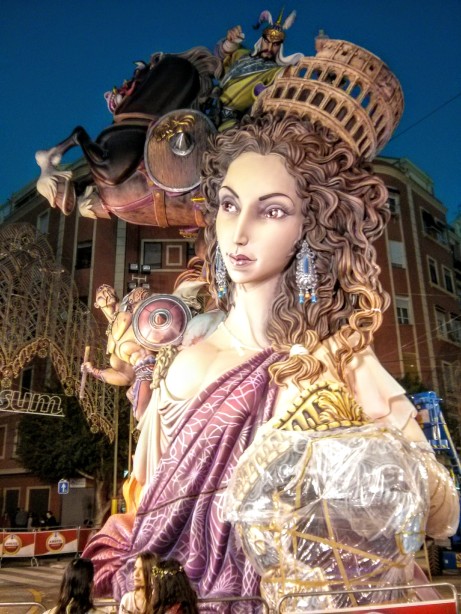 2 thoughts on “Another beginning to something that never ends”