Over the last several weeks there have been four deaths in my faith community. At memorial services and wakes I’ve talked with some of the children of a woman who took her own life, met the relatives of a friend who died of cancer, and hugged a mother whose 17-year-old son, despite a heroic struggle, finally lost the battle with depression.

These encounters have given me a lot to think about, but I’ll just mention two here. I’ve been reflecting on how such events change your perspective on your own grievances. Whatever has been causing hand-wringing can just stay quiet while you consider what the present and future look like to the loved ones who remain, and what they’re going to do to keep from being swallowed up by the past.

I’ve also been pondering what to say, and not to say, in the face of grief. A couple of things I’ve read recently are particularly relevant. This article gives advice for when visiting someone who is dying, and introduced me to the second piece, an op-ed on how not to say the wrong thing.

The authors, Susan Silk and Barry Goldman, call it the Ring theory of kvetching, a principle with wide-ranging application. The essay opens with some fine examples of the Wrong Thing to Say, then follows with a diagram and the rules of the ring theory. Here’s my version of the diagram: 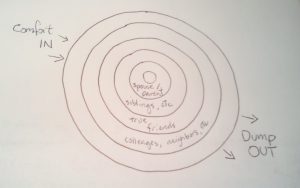 The inner circle belongs to the person at the center of the trauma–the person who’s gotten the diagnosis, or the parents of the child who has committed suicide. Then draw a circle around it, for the people next in closeness–the spouse or children, etc. In each successive circle, write in the next closest people, including friends, coworkers, neighbors, and so on. Close family belong in smaller circles than distant relatives, close friends in smaller circles than casual friends.

There is only one advantage to being the person at the center of the trauma: that person can say anything to anyone–she can rant, complain, weep, ask why this is happening, say she doesn’t want to talk to anyone. That is her prerogative. Everyone else can say whatever they need to say, too, as long as they say it to a person in a larger ring.

Here’s an excerpt from the article:

“When you are talking to a person in a ring smaller than yours, someone closer to the center of the crisis, the goal is to help. Listening is often more helpful than talking. But if you’re going to open your mouth, ask yourself if what you are about to say is likely to provide comfort and support. If it isn’t, don’t say it. Don’t, for example, give advice. People who are suffering from trauma don’t need advice. They need comfort and support. So say, ‘I’m sorry’ or ‘This must really be hard for you’ or ‘Can I bring you a pot roast?’ Don’t say, ‘You should hear what happened to me’ or ‘Here’s what I would do if I were you.’ And don’t say, ‘This is really bringing me down.’

“If you want to scream or cry or complain, if you want to tell someone how shocked you are or how icky you feel, or whine about how it reminds you of all the terrible things that have happened to you lately, that’s fine. It’s a perfectly normal response. Just do it to someone in a bigger ring.

The full article is worth reading, and can be found here.

Reviewing this valuable advice, I’m also reviewing in my head the conversations I had with those loved ones, and hoping that I didn’t add to their burdens by being insensitive. Maybe re-reading the articles would be helpful to me the next time I’m called on to mourn with those that mourn.

[Images: diagram is mine, photos are El Guapo’s]

7 thoughts on “Ring theory: Comfort IN, dump OUT.”