No, we didn’t attend, but while they waited for their cabs afterward, a few of those who did hobnob with the Royals were kind enough to make polite British small talk with us about the event.

Let’s back up a little. Making our way along some nice London street (I think by the Royal Courts of Justice, very cool photos coming soon), I noticed a few women wearing unusual little decorations on their heads, which trifles seemed to stand out, as if they were on a stalk of some kind, perhaps attached to a headband. I noticed one, and then another, and as we walked I saw a few more. As most of them were perched on ladies of a certain age, I wondered if they had all been to some sort of equivalent of a Red Hat Society gathering.

(Apologies for the fuzzy phone snap) You can see little tufts, right?

As we continued our walk, we began to see more strange headgear, until I realized, hey, those aren’t party jokes, they’re fancy society hats! In my defense, very few of the first ones I saw shared anything in common with an actual hat designed to protect the head.

Here’s an exception–this could keep the rain off, or provide some shade. Or help her impersonate a Dr. Seuss character.*

Nearing St. James’s Park, it became clear that something either had or was about to happen. My curiosity finally got the better of me, and I spoke to a woman who was queueing in a long line in front of Buckingham Palace.

The woman told me that they had been to a garden party with Queen Elizabeth. I made bold to ask a little more about it. It turns out that in order to find oneself holding a little plate of canapes and chatting with Her Royal Highness, one makes an application to be considered for the party. Their application had been submitted nearly two years earlier.

Great hat for hiding from anyone standing to your right.

She could wear hers to a Red Hat party. Her friend must secure hers carefully so it doesn’t fall into her lap.

Does the chin strap make it hard to chat? 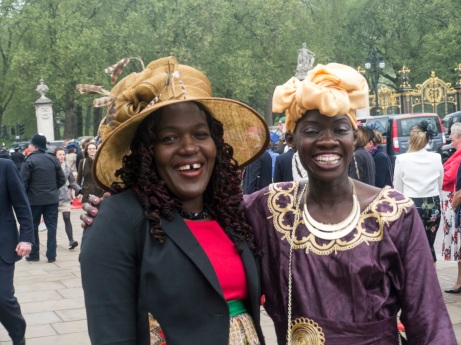 Ever so happy to be there

As even the aftermath was quite a spectacle, with regimental uniforms and hats of architectural splendor, I’m sure the event itself was a sight to see. I like to think of the Queen tilting her head to one side as she listens to someone compliment the refreshments. What else does one say? “Nice place you’ve got here. Reminds me of a palace I once saw….”? I wonder if one of the little dogs was allowed out among the guests.

It was a drizzly day, but I’m sure that nothing was left to chance. If anyone rates one of those big white event canopies, it is the Queen of England.

Our favorite whirligig of the day†

Ninja, Ginger, Fiddler, and me in a hat that would never do for a garden party.

Have you ever worn a hat designed for a purpose entirely other than head covering?

Though he met the “must have hat” requirement, he appears not to have been invited to the party. Perhaps they brought him a plate of little sandwiches later.

*This is the one I was thinking of, from One Fish Two Fish Red Fish Blue Fish: “Who is this pet? Say! He is wet. You never yet met a pet, I bet, as wet as they let this wet pet get.”

†Limonada is our local expert for all things fashion. I think I remember her telling me that a rig like this is called a fascinator. And I certainly am fascinated by the variety of things people are willing to strap to their heads.