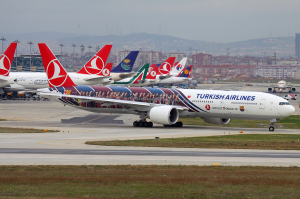 I ran into a friend in the airport on Thursday. He’s the tech guy at the self-service visa kiosks in the main terminal in Istanbul. He probably doesn’t know he’s my friend, but I consider him such, as he was very helpful to me last year when we found ourselves sorting out a little unexpected visa glitch.

What are the odds that I’d see someone I knew? I’ve been to Logan airport more times than I can count, and I don’t think I’ve ever recognized anyone working there.

I was super happy to see him, as I was having trouble again. Maybe it was cosmic forces planning to keep me humble. El Guapo had commented that it made a change for us to be in a foreign country with me the more experienced traveler in the situation. I was feeling good, recognizing our path through the airport; I knew where to find the place to get the visa, and where to find the line through passport control after that.

At the kiosk we poked our passports into the slot, punched in the info about when they expired, where we were born, and then did our best to give the machine access to our money, but it was having none of it.

Not far away there is a visa desk, with signs posted in Turkish, English, and perhaps other languages, saying that they aren’t affiliated with those e-visa kiosks (“upstart” was strongly implied), and not to waste everyone’s time by asking questions. The folks at the desk are willing to take cash for a visa, but it costs more to pay cash, and I’m not a big fan of more when less is an option. Before we capitulated, I thought it worth one last try.

So we headed back to the kiosks, and I saw my friend. I didn’t notice his face lighting up when he saw me the way mine did when I saw him; do you suppose Turkish men are stoic like that? Or could it be that he sees hundreds of people on an average day, whereas I see mostly El Guapo and Ninja? 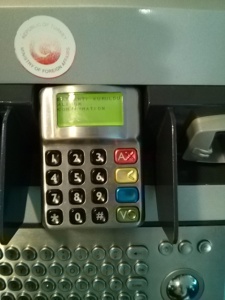 Whether he realized that I was a long-lost friend or not, he listened politely to my explanation of our difficulty, explained just what we needed to do,* and then stayed close by to make sure it worked. Too bad it wasn’t practical to do more than say thanks. I would have put him on our Christmas card list.†

With those little visa receipts in hand, we made it through the pasaport kontrolü and headed for the hotel desk, where Turkish Air is kind enough to arrange for a hotel for the night.◊ Last year the man at the desk had demonstrated both helpfulness and a powerful set of lungs (about which more here); I looked for him, but seeing two people I recognized was apparently beyond what the universe was willing to offer up–the new helpful guy was a stranger.

People are always saying how important it is to stay in touch with friends, and I’m beginning to rethink. Do you suppose if I sent next year’s Christmas card to the Turkish e-visa office, they’d post it somewhere where my friend would see it? 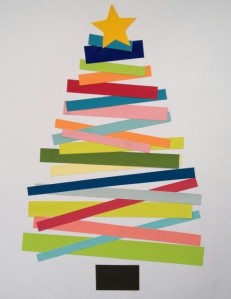 *Our failure wasn’t due to Clueless Foreigner Syndrome (though that did make us second-guess ourselves). It derived in part from hardware finickiness and in part from bad User Interface—the card reader was a little iffy, and though instructions seemed to indicate when to insert your card, in reality you had to push “confirm” first, then insert the card, then punch the red key with the big X if the credit card is Chip&Signature, rather than Chip&Pin. None of that is something you can figure out without the help of my friend. So glad he was there.

†Always assuming a Christmas card would please him. In any event, we make a Christmas greeting about 20% of the time–if you haven’t been getting one, that’s why. Next year is probably a likely year–if you want one, let me know!

◊I don’t know how widely the policy applies, but I know that in our case, when our itinerary involves two legs of a journey that has an unavoidable overnight stay, Turkish Air will cover it. Very helpful indeed.

5 thoughts on “More dispatches from Istanbul”