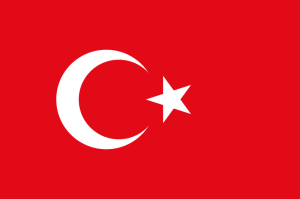 I’ll catch you up shortly on our latest shift of continent, but in the meantime, here is the substance of my first real conversation in Istanbul (I’m not counting exchanges in the airport or hotel), which took place at a restaurant a few blocks from where we’re staying:

Me to kind-looking older waiter : English?

K-LOW shows me the take-away menu, where the price is about 13 Lira, says a few tentative things in Turkish, picks up a newspaper from a low table, and starts leafing through it. I realize he’s looking for the exchange rate. He finds a page header with Lira in a dozen currencies I don’t have in my pockets, but I spot that € symbol on the next page and point it out to him. He mumbles a bit, working on the conversion, and says, “5?”

Me, looking at the kids: Two? and to my new friend: Two.

We exchange okays, and while he goes off to make it happen, Loquita, Ninja and I sit in leather chairs on the porch.

Despite our waiter’s shrug, he clearly had plenty of English. Our meeting across a language gulf was nowhere near the half-way point. The only thing I can consistently remember how to say in Turkish translates as “I like ice cream,”* and it didn’t even occur to me to trot that out, though I realize now I should have. Maybe tomorrow? 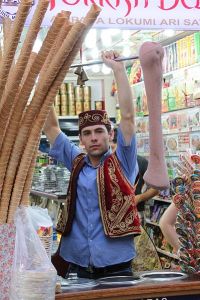 *El Guapo spent some time in Turkey as a college student in a touring performing group, and had great things to say about the ice cream. When you do a search for Turkish ice cream, this is the sort of thing that comes up, which makes me think that it’s quite different from the sort of thing you can get in New England. I understand it’s famous for not melting, due to a couple of unusual ingredients. This stuff looks more like taffy, or somebody’s arm.

5 thoughts on “Meeting across a language gulf”