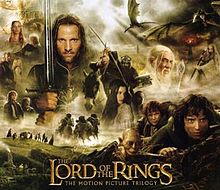 We’ve been drowning in a Lord of the Rings marathon for a while at our house. I know some people would say it’s only a marathon if you start at the beginning of Fellowship and watch until the Return of the King final credits roll, only pausing occasionally to scribble a few notes in dwarf runes and nibble some Lembas bread. But I’m still calling this a marathon though it took us many days–we’ve got the extended versions, and even the most die-hard fans will admit that some of the last scenes in Return seem marathons in themselves.

I mention this because not only do I have the soundtrack alternately lilting, menacing and soaring in my head, I also have visions of orc teeth and gigantic spiders to keep me company in odd moments. And then there are the larger, sweeping themes. (If you’re not a fan of the books or the movies, stay with me; there’s an analogy coming just around the bend.)

One of those themes appears in the story of the transformation of Smeagol into Gollum. During the travels of the fellowship we watch as Frodo, through kindness to the creature, seems to be reversing some of that process. Gollum seems to feel some loyalty, some affection for Frodo, and wants to be better. We see the creature arguing back and forth as the dark and the light war for control.

Always wary of potential threats to Frodo, Samwise remains suspicious, and certainly shows by the way he treats Gollum that he hasn’t achieved his sensitivity training certification. Sam shouts and curses at him, and doesn’t stay his hand. I don’t think we can say that Sam shoves Smeagol back into the dark–the one ring has been calling to him the whole time, after all. But we know that however much progress Gollum makes (spoiler alert!), he is not, in the end, truly reformed.

And now we get to the analogy portion of our post.

I’ve mentioned that we have much too much stuff in our house and in our barn, and that as a result of our positive experience with very-much-less stuff while living in Spain, we’re striving to cut ourselves loose of what we can, and set it adrift in an outward direction. I’ve reported that we’ve made some progress: I don’t have the official tally, but we’ve schlepped 2 car-loads of household things off to the thrift store, and sent very many bags of clothes on their merry way as well. Even as I write this there’s a very comfy gold plush easy chair out on the curb with a thumb raised, trying to look attractive to passers-by (if you’re interested, I’ll help you load it in your car). We’ve been filling up our recycling and trash bins with bits we had been keeping around “in case.” We’ve been trying to reform.

And then it happened–an event came along that started to lure us back from all our de-junking progress.  The bow and arrows we ordered for Loquita were delivered. How is this a crisis, you wonder? Well.

First we needed a target–no problem! I have a stash of styrofoam blocks (that I’ve been saving in the hopes that I could find a styrofoam recycling place or event–they happen, but rarely; I’ve had the stash for a long time), and I’ve got a variety of cardboard boxes we can take apart and cut to size and fill with the styrofoam.

And for a target face, well, how about this stuff that I think may have had some wallpaper-related purpose, and whose advent is lost in the mists of time, and which turns out to have developed a strange mottled pattern which makes it look sort of like hand-made paper–I’ll just draw a bulls-eye on there, and it will be great! A bit low to the ground, but wait–here on this shelf we have a sort of PVC-and-webbing bench/chair thing that I probably picked up from the side of the road during the first Clinton administration. It’s just the thing. We’ll get some scrap wood and pound a stake into the ground to anchor the bench thing in front of it with the box on top of that. Now doesn’t that look fine!

And then in case the shots go wide, we ought to have a sort of curtain thing, like they have at the archery range at camp. Well look! Here’s the big tarp that used to cover the woodpile, now weathered to the point of uselessness, that we haven’t gotten around to throwing away. We’ll just string a rope between some trees, and hang that over.

Oh, the arrows just whiz right through it? Well, I save those bags from buying wheat in bulk, and they’re made of the same thing as tarps–if we just stitch them together in rows we could hang those, too, and maybe that will help. Where did we put the painting drop cloths? Maybe they’d be useful here.

Do you see what’s happening? We can talk a good line, and we can bag up clothes, and box up a hand-crank pasta maker and the wooden table-top loom and that thing you can attach to your dryer hose to humidify your house, and take them all off to be donated, but the minute there’s an Event, a thing that calls for supplies, then we are rewarded for our reluctance to shed stuff, and our procrastinating, our keeping-in-case is reinforced.

We’ve got many more chapters to go in this story, and we are determined. I positively refuse to fall backwards into a molten river at the end. We will maintain our focus; we will keep at it.

And let me know if you’re interested in that chair. 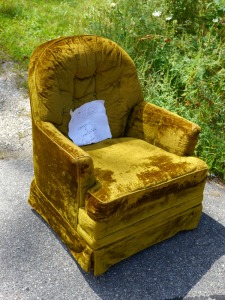 5 thoughts on “Dragged back into the dark”